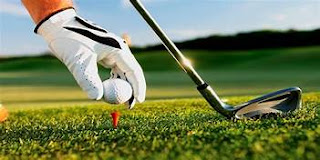 Every new golf season I take my own advice and get the loft and lies checked on my forged Mizuno irons. Like clockwork! Well, this year was no exception only this year has a twist.

After having my lofts and lies done I began playing fairly regularly. I noticed that I began to pull hook the ball or I would end up hitting the ball out of the toe that went nowhere! It wasn't every shot but on occasion, this was definitely occurring. I started thinking that maybe during the long layoff I had from the game over the winter, I just needed more practice or a tune-up lesson from the local pro. And indeed I did begin a more regimented practice routine to fix the problem. I even had the local pro take a look at my delivery, which was of no help!

During my third round of league play, everything seemed to be going great. I was on track to shoot par when on two back-to-back holes I managed to find the club's toe. I'm talking toe when I say toe! Two shots that went straight down the middle of the fairway and very short of my intended target. I looked over at one of my playing partners on the second occurrence and asked if I did something different in my swing. He said no, but when was the last time I had my forged iron's loft and lies checked. I told him about three weeks ago. He said really? How were you hitting your clubs before you got them re-lofted? Straight down the middle with a slight draw was my response. Hum, is all he said in response. This definitely got me thinking about what was done to my clubs in the Pro Shop.

I took my clubs to a trusted friend that happens to work in the golf department at Dick's Sporting Goods. I told him what was happening with the toe strikes and also told him that I had just had my clubs checked to be two degrees up, which is my spec. When we got the clubs on the machine and started measuring them, to my surprise, every club was two degrees flat. When I went in to get my clubs adjusted the last time I just dropped them off and then went in and picked them up afterward. I thought I was in good hands with the Pro Shop Wrench. Big mistake! I didn't ask any questions. I didn't go to the range to test them out. I just trusted that the guy would perform the task as required. Never again! I chalk this up as my mistake!

The moral of this story is as the title of the post suggests - "Trust But Verify" that you are getting what you requested done to your clubs. Don't take for granted that the guy who's been repairing clubs for forty years always gets it right. People have been known to make mistakes no matter what their level of proficiency is. I'm sure he made a simple mistake when he read the service order. This is another lesson learned in my golf adventures. Next time I'll definitely make sure that what I requested to have done is done correctly. After spending money and time figuring all this out, my clubs are in great shape for the new season.

Where I buy my golf equipment!